Located in northwest Africa, Morocco covers the territory of the Western Sahara. Known, historically, as “The Farthest West,” Morocco is home to famous cities and destinations, including Casablanca, Tangiers, and the Sahara Desert. Travelers to Morocco love the country’s unspoiled beaches, majestic mountains, and picturesque ports of call.

When you visit Morocco, you not only experience a rich culture, you can travel over a diverse terrain – an area that spans from sea level on the Atlantic Coast and climbs to an elevation of 2,300 meters (13,000 feet) in the High Atlas Mountains. Morocco’s attractions include Jbel Toubkal, Africa’s twenty-second highest mountain; numerous World Heritage sites; and 11 national parks, all which feature a variety of wildlife.

Few countries in the world offer the ultimate escape like Morocco. Here, aqua waters caress white-sand beaches and snow glistens on the peaks of the Atlas Mountains. Rest assured that, behind city walls, an adventure waits – one that will lead you on a journey filled with interesting art, unique architecture, and savory cuisine.

For example, only in Morocco will you find alleys that open up to busy and bustling souks – each tent filled with spice baskets and lavishly colored silks. Hammams also allow tired travelers to indulge in salt scrubs and relaxing steam baths while desert vistas invite adventure seekers to climb or hike seaside cliffs or explore trails that lead to higher elevations.

Geographically, Morocco comprises 4 areas – the Sahara Desert, with its oases and Berber town; The Rif and High Atlas HIgh Atlas Mountain ranges (geared toward adventurers and hikers); the plains, home to the renowned cities, Fez and Marrakesh; and the sandy shores along the Atlantic Ocean and Mediterranean Sea. The small coastal towns of Casablanca and Rabat can be found in this area.

This all leads the intrepid traveler to wonder what activities he or she should include on a Moroccan holiday. If you like to windsurf, you will find the ideal place in Essaouira, a resort town on the Atlantic shore. The Skala de la Kasbah and its eighteenth-century ramparts shield the city’s medina while strong and steady trade winds invite surfing, kite-surfing and wind-surfing activities.

If you are not into windsurfing or other surfing pastimes, you can arrange a trip to the city of Fez, where you can get your fill of souk shopping in the medieval town’s marketplace. You might also consider de-stressing at a hammam (steam bath) in Marrakesh or riding a camel across the golden dunes of sand in Erg Chebbi. Erg Chebbi represents one of Morroco’s various ergs – seas of sand dunes created by the wind. The ergs lie inside the Pre-Saharan Steppes, north of the Sahara Desert. At this point, you may be asking: When is the best time to travel to Morocco?

Because Morocco’s geography varies in nature, the best travel time depends on where you want to go. Generally, however, April or May offer the best weather. Try not to travel in the Sahara region and, to a lesser degree, to plains cities in the middle of summer. Instead, reserve midsummer visits to coastal cities, such as Rabat and Essaouira.

In winter, you should avoid traveling to the mountains in Morocco. Most accommodations don’t provide heating and are remote. Consider reserving mountain travel and tours for the summer months. For those seeking to winter travel in the desert, the days may be clear, sunny and free of precipitation but nighttime can be unexpectedly cool and even cold.

Because Morocco embraces the Islamic religion, you need to plan your travel accordingly. One of the major holidays, Ramadan takes place from mid-April to mid-May – a time when the temperatures are more temperate. During this time, however, followers of Islam fast during the day, which can lead to difficulties with dining or transportation. Ramadan commemorates the time the Qur’an (the holy book of Islam) revealed itself to the prophet, Muhammad. The night of this unveiling, Lailut ul-Qadr, translates to the “Night of Power” in English.

Because the Islamic religion is the foundation for cultural activities and festivals in Morocco, it helps to know a little about the religion before you explore the country. Islam, itself, means surrender or submission, which refers to a practitioner’s total acceptance of God’s will.

The Prophet Muhammad, who founded Islam, lived in Mecca from 570 to 632. Mecca, at that time, covered modern-day Saudi Arabia. The year 610 establishes the year of the birth of Islam. That is when the Archangel Gabriel visited Muhammad, revealing the word of God. In 622, Muhammad moved to Medina for protection – a trip known as a hijra. The year represents the beginning of the Muslim calendar, or year 0. The year also notes the time that Muhammad was recognized as a religious prophet.

The Five Pillars of Islam

The Quran represents the Word of God, revealed in the Arabic language to the prophet, Muhamad. Five pillars or observances seal the faith –

• The acceptance that no God exists but the God of Muhammad

• Praying toward Mecca 5 times each day

• Giving alms to the poor

• Fasting from sunrise to sunset during Ramadan

• A pilgrimage or hajj to Mecca must be made, at least one time, during a follower’s life

It is helpful to know some of the tenets of Islam, as Morocco is home to numerous mosques, and many festivals center on the religion.

Journeying to Morocco also means familiarizing yourself with its foods. Besides couscous, Moroccan cuisine also includes lots of cooked vegetables, all of which can be scooped with bread. Vegetables include tomatoes, green peppers, courgette puree (made of local olives), and carrots. A special breakfast food is B’ssara, a rich soup made of dried broad beans, sprinkled with cumin and drops of olive oil, and served with fresh baked bread. Even eating is an adventure when you set your travel sights on Morocco.

Things to Do and See

Morocco is the 18th largest country in Africa (excluding Western Sahara and the Spanish Territories).  It shares its eastern border with Algeria, the Pacific Ocean on the west, and the Mediterranean Sea to the North.  The country is the closest in proximity of any African country to Europe situated less than 13 km (8 miles) from Gibraltar which can be seen from both coastlines.  Scattered along the Morocco’s Mediterranean coast are three Spanish territories.

Morocco has 2,945 km (1,830 mi) of coastline (including Western Sahara) and 42 major rivers and streams.  From north to south (vertical measurement), the country measures about 1815 km (465 mi) northeast to southwest and 525 km(327 mi) southeast to northwest.  Morocco is considered a strategic location due to its proximity to the Strait of Gibraltar which is only 29 km (19 mi) away.

The Morocco Constitution provides for a constitutional monarchy with branches divided into Executive, Legislative and Judicial functions.  Morocco has a King.  The head of the Morocco Government is the Prime Minister. The country is divided into 12 limited, self-governing council areas and comprised of 75second-tier administrative divisions and providences.  The largest region is Casablanca-Settat which is followed closely by Rabat-Salé-Kénitra, Marrakech-Safi, and Fès-Meknès. Morocco is a member of the United Nations, African Union, Arab League, Arab Maghreb Union, and Organization of Islamic Cooperation. 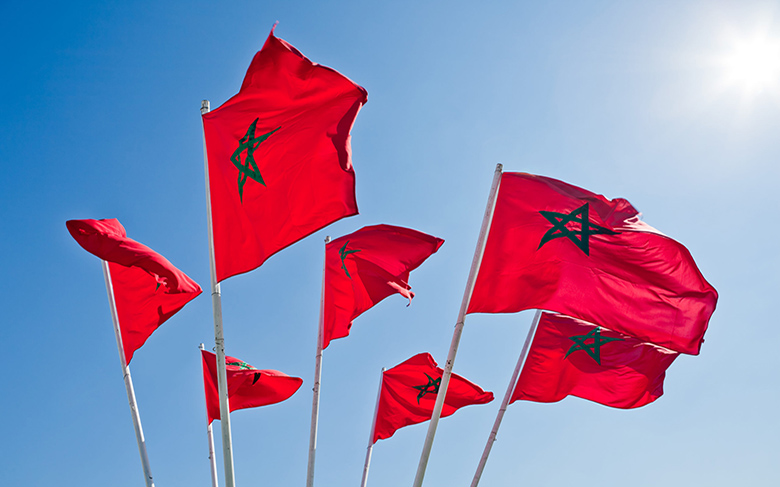 Below is our country profile containing facts and information to familiarize you with Morocco. 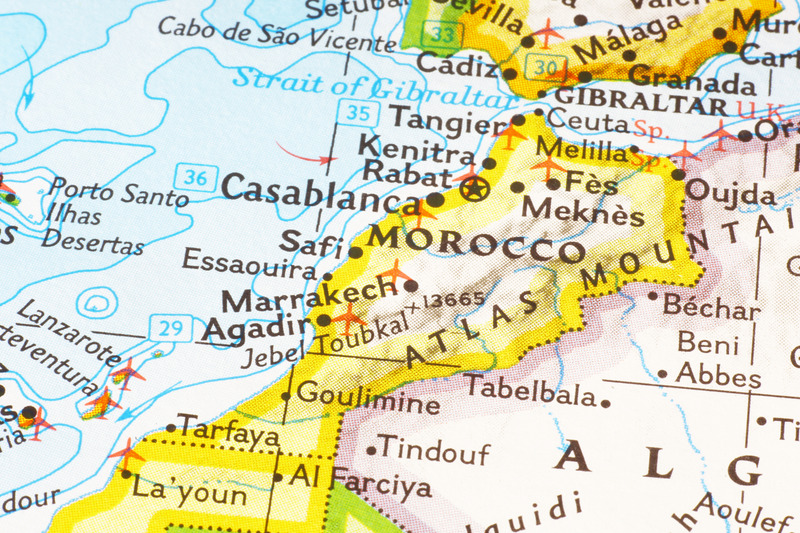 What currency is used in Morocco?

The official monetary currency of Moroccan is the Dirham commonly represented by the symbol (DH) and consists of coins and banknotes.

Where should I visit when in Morocco?

Morocco is the most popular tourist destination in Africa.  However, the country’s popularity does not detract from the superlative and hundreds of unspoiled attractions.  For those seeking outdoors adventure, there are more than 10 protected areas and national-parks and sites such as Souss Masa National Park, heritage sites such as Ait Ben Haddou, the Arganeraie Biosphere Reserve and The Mamora Forest near Rabat.

For travelers preferring to visit cities and towns, Morocco is famous for some of the most important architecture and historical sites in the world.  These places are dotted with mosques, such as the world’s second largest, the Hassan II Mosque, museums of antiquity, Moroccan arts, archaeology and some of the world’s oldest ethnographic museums such as the Tetouan Museum of Indigenous Arts.

When is the best time of year to travel to Morocco?

Because of Morocco’s diverse geography and climatethe “best time of year” to visit will depend on where you will be travelling.  Peak travel seasons are between April and October.  In most major coastal cities in Morocco, January to May is the wettest, coolest time of the year.  Average daytime temperature is about 70 °F (24°C) with nighttime temperatures more than twenty degrees cooler.  The climate varies by region from coastal cities such as Essaouira due to the height of the Atlas Mountains with elevations approaching 14,000’ above sea level.

What are some of the “must see” destinations in Morocco?

Certainly some of the most popular and “must see” destinations would include The Marrakech Museum filled with traditional Moroccan art, the Natural Science Museum in Rabat, and the American Legation Museum with its beautiful courtyard and picturesque views of the Straits of Gibraltar.  Another “must see” destinations includes a visit to the Raissouni Palace in Asilah and the Medina of Rabat.

For those seeking outdoor adventure there are diverse activities appealing to all tastes and interests such as camel treks, a visit to one of many golf courses such as The Royal Dar Es Salaam Golf Course in Rabat or the Royal Marrakech Golf Club in Marrakech. Guides and travel companies offer exception daily tours for trekking, hot air ballooning, charter boats where world class fishing waters abound. There is also an abundance of kite surfing and windsurfing spots from such ports of call on Atlantic Ocean like Essaouira.

How expensive is Morocco?

Youth hostels and hotels are plentiful with season nightly prices ranging between USD$10 and USD$15.  Mid-range hotels in the larger cities such as Casablanca range between USD$48 to USD$150 a night but bargains abound.  When planning your trip account for meals, ground transportation, entrance fees, and entertainment.  Flights, day tours, and rental car costs will vary based on your travel itinerary and length of stay.  There are a variety of river tours as well as dozens of companies offering cruises to ports throughout Morocco such as the Port of Safi or the Port of Essaouira.

Do I need a visa to visit Morocco?

Depending on your citizenship and country of origin, visas and passports and other travel documentation is required unless the foreign national is a citizen of a country that is eligible for a visa exemption.  Citizens from almost 70 territories and countries, including the United States, Canada, and all European Union citizens can lawfully enter Morocco for up to 90 days without a visa.